The Book of Answers–C.Y. Gopinath

The day one receives a book which claims to have an answer to all the ills of this planet, should be a cause for celebration. Shouldn’t it?, and yet when Patros Patranobis is handed this package containing the book, he can’t get rid of it quick enough.

To be fair to Patros, he has spent all his adult life attempting to fly under the radar, to be an observer of his world, rather than some one who does. His way of dealing with problems is to push them to one side, so he sells the book to a dealer in 2nd hand smut mags and walks away, problem solved.  Several months later, the book surfaces as the font of all wisdom for a self styled guru & adviser to one of India's top politicians, Ishwar Prasad, who claiming divine inspiration, passes a whole range of laws with the sole purpose of strengthening his own position as top dog of Indian politics. 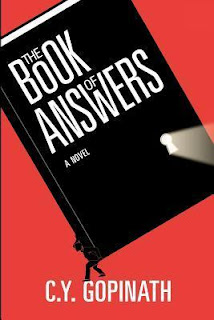 Patros is the only one who could upset this powerful individuals plans, who could reveal the lies being passed off as gospel, could reveal that this book has never been opened. In fact the key is missing and only he is capable of finding it’s location, but Patros wants nothing to do with it. This suits Ishwar Prasad & his cronies, for as long the book remains closed they can be inspired in any direction they like, as the author states “there is nothing more dangerous than a book no-one has read”.

Now, everything would be fine here, Patros would go on with his life, passively observing his country falling apart, Ishwar’s plans of dominance would go ahead undeterred. Except Patros has a conscience, in the shape of his common-law wife, the idealistic Rose Jangry and an old friend Arindam Roy, who will manipulate any situation for his own ends. Between them Patros, is cajoled, pushed  duped & generally conned into finding the key – all sorts of scrapes and adventures ensue as our “hero” stumbles around India and finally into direct conflict with Ishwar Prasad.

This book reminded partly of Monty python’s “The Life of Brian, not the subject matter, although religion is slightly poked at, but the humour. By using satire and general absurdity, the writer highlights endemic corruption whether of state, or on an individual level and how easy it is to fool a populace with slight promises and small tokens.

The Book of Answers was shortlisted for The Commonwealth Book Prize 2012, and according to Mark from Eleutherophia, who has read a fair amount of the list, it deserves it’s place. I’ve only read one other from this list and of the two this would be my preference, I thoroughly enjoyed following Patros as he stumbled from point to point, manipulated by all he comes into contact with, in the process becoming an inspiration and a very unwilling hero.

I would like to thank C.Y. Gopinath, for sending this book to me and to Mark for pointing me in this writers direction.

Thanks Gary, I'm glad you liked this as much I did. Unusual and funny. I'd recommend it to anyone.

A very enjoyable book, well worth reading. I'll be posting my take on it next week :)

This sounds very intriguing. It's going on my wishlist!

I love the humour and satire genre, particularly with a subtle touch. Thank you for the review Parrish, will certainly check it out.

Hi Mark, yes I found it a proper page turner, just following what strange ideas Ishwar Prasad, would conjure up next & how Patros would get himself out of this predicament.

Hi Tony, Saw your post on this & kudos on a response from the writer.

Hi Amritorupa,based on your comment you will definitely love this then.

I finished this book last week and enjoyed it. I often struggle with satire, but this book was contained my kind of humour. Not sure how I'm going to review it yet!

Hi Jackie, we'll check out how you decide to go, when you post it.Also have yet to see a post by someone who disliked this book, so extra kudos to the writer.