Death in the Museum of Modern Art - Alma Lazarevska

When Bosnia and Herzegovina declared independence from Yugoslavia and achieved United Nations recognition, the Serbian leaders and army whose goal was to create a "greater Serbia", declared a new Serbian national state, Republika Srpska (RS).

They carved this from the territory of Bosnia and Herzegovina, encircling Sarajevo with a siege force of 18,000 stationed in the surrounding hills, from here they assaulted the city with weapons that included artillery, mortars, tanks, anti-aircraft guns, heavy machine-guns, multiple rocket launchers, rocket-launched aircraft bombs, and sniper rifles.

From 2 May 1992 - to 29 February 1996 the Serbs blockaded the city, the Bosnian government defence forces inside the besieged city were poorly equipped and unable to break the siege. It became the longest siege of a capital city in the history of modern warfare, during which 11,541 people lost their lives, including over 1,500 children. An additional 56,000 people were wounded, including nearly 15,000 children. When the siege ended, the concrete scars caused by mortar shell explosions left a mark that was filled with red resin. After the red resin was placed it left a floral pattern which led to it being dubbed a Sarajevo Rose.

This forms the backdrop to Death in the Museum of Modern Art, a collection of six short stories by Alma Lazarevska, a graduate of the University of Sarajevo, and a seriously acclaimed writer in her homeland. In fact this collection won the “Best Book” award from the Society of Writers of Bosnia and Herzegovina.

I was going to write a small piece about each tale, but on thinking more on the subject decided that this post would work better if I just gave an overall impression of the collection and not try and dissect the inner workings of what are very beautiful sad.. ..I wanted to say snapshots but that doesn't capture the details, doesn't explain how these stories resonate. They are more like miniatures, each one capturing a moment, highlighting the minutiae of an individual living a life besieged, a life encircled by the ever present character of death and trying their damnedest not to invite them in. This in a way is a state we can all comprehend as all our lives are circumscribed by that old foe, although these tales in their concentrated heightened and in certain cases surreal nature bring the lens in tight, take us below the epidermis.

What is truly breath-taking though, is that they do this without recourse to all the blood and gore one would expect from a book of tales about a city facing one of the bloodiest sieges in modern history, in a city where the all the creative might of the arms industry was pouring down with the regularity of a local shower, it’s the teardrop that pierces the heart. This is a collection of moments, of individuals contemplating what it means to hold on to ones humanity, of people struggling to preserve what’s of worth to them and despite the inherent fragility of the flesh - fighting against the inevitable sinking of the light. 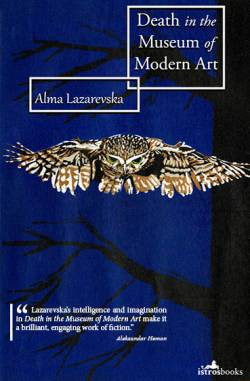 Death in the Museum of Modern Art, is a pellucid and yet dreamlike collection of tales, that manages to capture the beauty in moments where none would be expected, and yet doesn’t shy away from intrinsic monstrosity of a life defined by cannon fire.

Alma Lazarevska is a Bosnian prose writer and member of Bosnian PEN. Her published books include Sarajevo Solitaire; The Sign of the Rose, Death in the Museum of Modern Art and Plants are Something Else (the title story of which has recently been included in an edition of the magazine Wasafiri).

An Interview with Alma Lazarevska in: The Mantle

This collection of short stories was translated by Celia Hawkesworth, who worked for many years as Senior Lecturer in Serbian and Croatian at the School of Slavonic and East European Studies, University College, London. She has published numerous articles and several books on Serbian, Croatian, and Bosnian literature, including the studies ‘Ivo Andric: Bridge between East and West’ (Athlone Press, 1984); ‘Voices in the Shadows: Women and Verbal Art in Serbia and Bosnia’ (CEU Press, 2000); and ‘Zagreb: A Cultural History’ (Oxford University Press, 2007).

Among her many translations are two works by Dubravka Ugrešić, published by Weidenfeld and Nicolson, 1998; ‘The Museum of Unconditional Surrender’, short-listed for the Weidenfeld Prize for Literary Translation, and ‘The Culture of Lies’, winner of the Heldt Prize for Translation in 1999.

Published by the wonderful Istros Books.
Posted by @parridhlantern at Sunday, August 23, 2015

I remember watching the Bosnian Civil War on American Media with horror.

There is some irony in the fact that such terrible events often yield very worthwhile literature.

I've always felt totally confused about the conflict in that part of the world: the various outbreaks of hostility seem to have emanated from such complex and complicated causes. Clearly, the enmities are stong and go back a long way, and they're so fiercely held. It's clear that this collection of stories really touched your heart. The news media has severe limitations when it comes to showing how life really is for people in a war zone: we see the bombs and the blood but not the daily struggles of the people who live through it all. Thanks for writing about this book. I'll be looking out for it.

Hi Brian, Also remember the reporting of this & the fall out from this time still occasionally makes the news here. The irony is definitely there but tempered by the cost.

Hi Violet , A lot of the hostilities are historic or very historic & can seem like oversized family feuds that have got out of hand but this part of the world has been trampled & pillage by warring factions for centuries & the bad blood builds up until it finds some release, or that is how it appears at times. Too much hurt hatred and fear can never bring about a pleasant future & sometimes all that can be done is record it. Hence the plethora of poets and writers in that region.

Like Brian, I remember the news reporting this terrible war back in the 90s. I would really like to read these stories, even though I know they will be harrowing, if only to familiarize myself with a part of the world I don't know that much about.

These stories are a testament to the resilience of the human spirit, even in the face of certain death.

Fascinating review, by the way!

Hi Maria, Thanks Although these stories are set in a time of extreme conflict, they didn't come across as particularly harrowing, yes the subject matter was but they way the stories are written it shows how people strive for some form of normality with which to anchor their existence & how even in such times people's resilience & desire for what was their lives for the most part wins out, as I stated in the post it's not the all the might of the arms race, but the teardrop that pierces the heart.