She says she’s okay. You say you’re okay and think she must
really be okay and that you really are okay. Her expression is
gorgeous, as if she were seeing for the first times the scenes she’d
wished for her whole life. Then comes the rotten breath, eyes
hollow even though she claims (while you keep quiet, as in a
silent film) that hell can’t be the world she lives in. Cut it out
with this bullshit text! She screams. The kaleidoscope assumes
the look of solitude. Crack, goes your heart.

Tres is Roberto Bolano’s second collection of poetry to be published in English, and like Romantic Dogs before it, this is a bilingual edition with the English translations by Laura Healy. As the title suggests, Tres is in three parts and the poem above is from “Prose from Autumn in Gerona” a series of prose pieces slowly unfolding into a tale of unrequited love, with each poem capturing an image, a moment fractured, with the writer attempting to piece together memory fragments like mirror splinters, each sliver an image, a puzzle that the writer needs to understand or at least come to terms with. “Prose from Autumn in Gerona”, like Bolano’s novels, dissolves the borders between fictional narrative and memoir as we follow a certain R. Bolaño through these various poems that - like a series of micro narratives written sometimes in first person, sometimes third - attempt to reconfigure the puzzle, to understand his world and where and who he is within it.


Dejection and angst consume my heart. I curse the
Arrival of day, which calls me to a life whose truth
And significance are doubtful to me. I spend my nights
plagued by continuous nightmares.   (Fichte)

Indeed, dejection, angst, etc.
The pale protagonist waiting, at the exit of a theatre? of a
Sports field? the arrival of the immaculate grave. (From this
autumnal perspective his nervous system may seem spliced
into a war propaganda film.)

The second section, “The Neochileans” is one long poem written around the time of Bolano’s first novel & just adds to the bewilderment, fragmenting any ideas of what is real, of what is Bolano & what will eventually be seen as “The Myth of Bolaño”. The poem reads as a Bildungsroman, like the Savage Detectives, this is about a group of young idealist, looking for an ideal to follow, for something to give themselves to. The story follows a group of musicians as they follow the road in search of wonder,of a path to their dreams, it’s as though Bolano was channelling Kerouac & filtering the ideas through his own world view.


The trip began one happy day in November,
But in a sense the trip was over
When we started.
All times coexist, said Pancho Ferri,
The lead singer. Or they converge,
Who knows.
The prologue, however,
Was simple:
With a resigned gesture we boarded
The van our manager
Had given us in a fit
Of madness
And set off for the north.

The band set off on their trails, heading north from Chile through Peru and Ecuador, and we follow as they try to discover who they are and what it is they are searching for, trying to piece together their own identities along the way, before realising that what they are looking for has no substance and that any perceived ideal was merely a hindsight reconstruction of chance, happenstance.

The final section “A stroll through literature”, is a series of short and in some cases very short poems that number from 1 to 57, and appear more like a recounting of dream images that start and finish with Georges Perec. Through this catalogue of dream scenarios we encounter various writers (Gabriela Mistral, Alonso de Ercilla, Archibald MacLeish etc.), who confront and confound the writer: some are seeking a kind of help from him, others merely bemuse him, remind him of his inability to do what is required of him, or just leave him gutted, feeling pointless. “A stroll through literature” also features one of Bolano’s favourite images, that of the detective, who seems to be a witness within the various dreams, who - as Bolano’s alter ego - seems lost in the world of the writer and is there to fathom out its mysteries, but remains constantly bewildered by his encounters. Even by what purpose he should serve.

~~~~~~~~~~
Tres, is Bolano at his best, condensed, stripped bare of all but the essence, reduced to a rawness that haunts. They have an hallucinogenic beauty, that has you throwing around words like “cinematic”, “experimental”, and "kaleidoscopic". These poems are all the above but there is a questioning nature that appears to show a writer trying to find his voice, asking of himself & through the poems, prose, and micro fiction of those he admired and respected, where he stood as a writer. Bolano always considered himself a poet above all else and Tres shows us why this was his favoured persona.

We’re undone father, not cooked or raw, lost in the vast –
ness of this endless dump, wandering and going astray, kill –
ing and asking forgiveness, manic depressives in your dream,
father, your dream that had no borders and that we've dis –
emboweled a thousand times and then a thousand more, like
Latin American detectives lost in a labyrinth of crystal and
Mud, travelling in the rain, seeing movies where old men ap-
pear screaming tornado! tornado!, watching things for the last
time, but without seeing them, like spectres, like frogs at the
bottom of a well, father, lost in the misery of your utopian
dream, lost in the variety of your voices and your abysses,
manic depressives in the boundless room of Hell where your
Humor cooks. 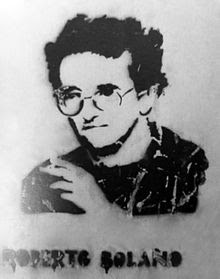 17. I dreamt I was an old, sick detective and I was looking for
people lost long ago. Sometimes I'd look at myself casually in
a mirror and recognise Roberto  Bolaño.

Roberto Bolaño (28 April 1953 – 15 July 2003) was a Chilean novelist, short-story writer, poet and essayist. In 1999, Bolaño won the Rómulo Gallegos Prize for his novel Los detectives salvajes (The Savage Detectives), and in 2008 he was posthumously awarded the National Book Critics Circle Award for Fiction for his novel 2666, which was described by board member Marcela Valdes as a "work so rich and dazzling that it will surely draw readers and scholars for ages. He was described by the New York Times as "the most significant Latin American literary voice of his generation.

Although deep down he always felt like a poet, in the vein of his beloved Nicanor Parra, his reputation ultimately rests on his novels, novellas and short story collections. Although Bolaño espoused the lifestyle of a bohemian poet and literary enfant terrible for all his adult life, he only began to produce substantial works of fiction in the 1990s. He almost immediately became a highly regarded figure in Spanish and Latin American letters. (Wikipedia)

I like "stripped bare, and a rawness that haunts" as you describe him. I haven't found a Bolano I like, but I suspect that has more to do with me than him. You, great appreciator of poetry, help open my eyes to possibilities.

Time and memory are such fertile subjects for literary prose and poetry.

I like that fact that you mentioned Kerouac. The verse that you posted certainly shows some parallels.

Hi Bellezza. We all have writers that for whatever reason just don't appeal, one of mine happens to be Charlie Dickens, I can understand the fuss & discuss the merits, but still doesn't make me any more a fan of his works.

Hello Brian, add in unrequited love and the angst that doth follow & you have half of Bolano's magic formula. As to the Kerouac, I cannot claim total credit for that it's used as a reference on the cover.

Once again you have brought some powerful poetry to our attention. At least I am a bit familiar with the author.
Now I need to explore his poetry and his essays (referenced in Andres Neuman's novel Talking to Ourselves).

Hi James I interviewed Andre Neuman on this blog a couple of years ago, he also writes poetry although don't think it has been translated yet