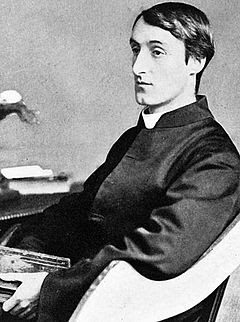 When weeds, in wheels, shoot long and lovely and lush;

through the echoing timber does so rinse and wring

the ear, it strikes like lightenings to hear him sing;

The glassy peartree leaves and blooms, they brush

the descending blue; that blue is all in a rush

with richness; the racing lambs too have fair their fling.

A strain of the earth’s sweet being in the beginning

before it cloud, Christ, lord, and sour with sinning,

Innocent mind and Mayday in girl and boy,

most, O maid’s child, thy choice and worthy the winning.

Gerard Manley Hopkins (28 July 1844 – 8 June 1889) was born in Stratford, London,to Manley and Catherine (Smith) who where high church Anglicans, his father was a marine insurance adjuster , and a published poet. Hopkins was the eldest of nine children. later on (1854-63)  he went to a grammar school in Highgate where he won  the poetry prize for the “Escorial” and a scholarship to Oxford. In 1867 he won First-Class degrees in Classics and "Greats" (a rare "double-first") the following year he entered the Society of Jesus. Apart from a few non representative pieces placed in various periodicals of that time, he was never published during his lifetime, it was down to the friendship he had with Robert Bridges (Poet Laureate 1913) whom he had known since Oxford, that he became published posthumously when in 1918 Robert Bridges arranged for their publication. He now is one of the established greats amongst the Victorian poets. His experimental explorations in prosody (especially sprung rhythm) and his use of imagery established him as a daring innovator in a period of largely traditional verse.

Email ThisBlogThis!Share to TwitterShare to FacebookShare to Pinterest
Labels: poetry, Pomes all Sizes